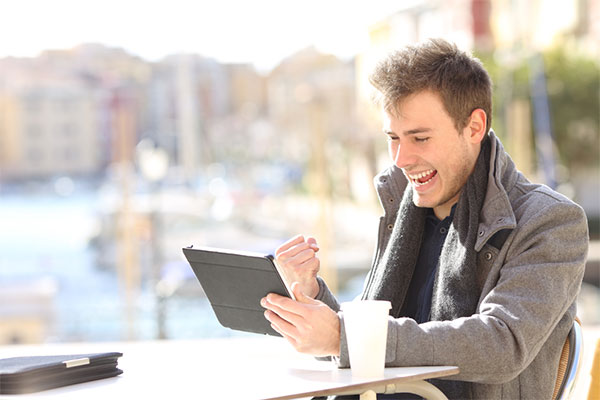 A: Protection from the Hacker in the Hotel Lobby Bar

Mattie’s long work day on her business trip was done.  The top sales rep for her company, she settled into a comfortable hotel lobby chair with a well-earned glass of Chardonnay and picked up her Samsung S9+ phone. Now on her own time, she wanted to catch up with family and friends and started using the hotel’s free Wi-Fi.

As she read about her teenager’s day, a hacker sitting at the bar stool on the other side of the hotel lobby spied on her data using a “sniffing” tool.  He was happy because Mattie had no Wi-Fi encryption protection on her smartphone.  He could easily see what she was doing and watched for something that let him into her personal – and potentially her company’s – data.

The hacker was smiling, liking what he saw. Having intercepted the TCP connection between Mattie’s smartphone and the server she was connected to, the hacker stole her log-on credentials and observed what she typed, including her corporate security credentials. He now had access to Mattie’s corporate web applications, the source of so many interesting things: sensitive documents, financial information, emails, etc.

In less than five minutes, he downloaded personal employee and customer information, along with Mattie’s personal data. Unfortunately, she also had a list of passwords to her company and several of her client’s banking accounts in an unprotected Word document.  It included a list of bank account numbers and SWIFT codes for money transfers that she used to coordinate sales with accounting departments.

Mattie was happily sending texts to her husband and didn’t know she has compromised the company and her key clients.

This didn’t have to happen.  If Mattie’s company had provided her with Wi-Fi security that encrypted all of her mobile wireless activity, she would have been safe. So would her company and her clients.  Because Mattie’s traffic wasn’t encrypted with a security solution, she opened up a can of worms both for herself and her employer.

The reality is that we almost never truly separate our business and personal lives. We’re “always on” and use our personal communications to be productive, just like when we reconnect to that virtual office. After all, that’s one of the reasons Mattie was a top performer.

But unless Mattie encrypted and hid personal sessions from hackers, she not only put herself at risk, she put her customers and company at risk.

Mobile Identify theft is one of the fastest growing types of breaches due to the prevalence of mobile devices such as smartphones and tablets.  Many companies don’t realize the risk. But a smart encryption solution that works hand in hand with corporate-wide tools can provide a company’s employees Wi-Fi security. Mobolize offers a simple solution that seamlessly turns itself on and off whenever employees switch from the corporate to the personal wireless world and back again. An encryption solution that only encrypts traffic when necessary and doesn’t use up the smartphones batteries. It also doesn’t break apps, like Netflix, so one can binge-watch “The Crown.”

Designed for and proven by Mobile Carriers and Integrators to deliver to their customers, both business and consumer, Mobolize’s white-labeled Secure Wi-Fi solution will provide complete protection and peace on mind on any Wi-Fi network.  Read about it here.