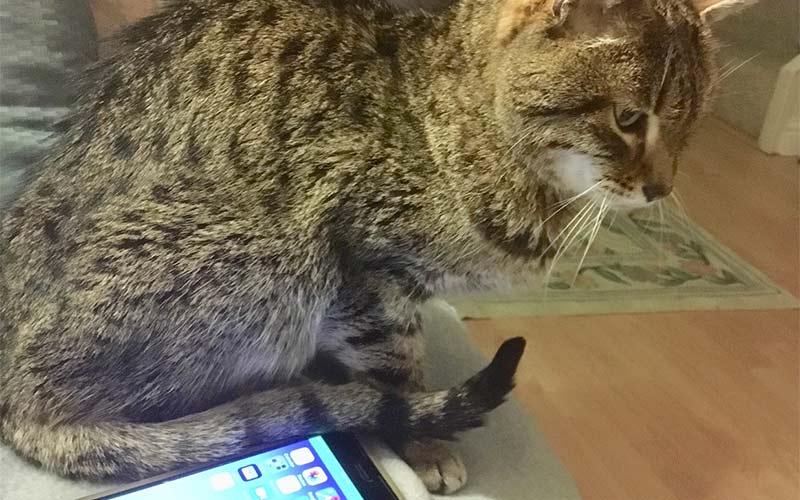 I’ve spent a career in high tech, so I know that there are places where the Wi-Fi connection disappears because the phone hangs on to Wi-Fi and won’t easily switch to my cellular network. Not only is that frustrating, but it can be stressful if it cuts out or delays access to needed information.

Aja, my cat buddy, agrees. She listens to my Wi-Fi dead zone tales often enough when I tell her about the stressful start of a journey because I was stuck in a dead zone. It’s usually when I leave the house, called a “driveway” dead zone, but there are other times too.

1. Leaving my house for an unknown location

The primary dead zone impact is experienced when driving away from home. My Wi-Fi covers to the edge of the driveway and parking lot of my condo complex, then I end up in a dead zone when I approach the street. The problem is that I attend a lot of meetings for various boards or businesses and I don’t know the driving directions if it’s a first time visit. I depend on GPS to get me there.

No Google Maps or Waze means no directions. No directions at the point where I must enter busy city streets means I get frustrated and stressed.

My solution is to turn off Wi-Fi and restart GPS on cellular. Again, frustrating, and I admit I don’t give the dead zone a lot of time to recover. But if I need to enter traffic with the right directions, I switch off Wi-Fi and change to cellular because it’s also about safety. I don’t want to engage with my phone once I’m driving. I want efficiency, not frustration. I just want to leave the house and be ready to roll.

2. Between my yoga club and car

I love practicing yoga and do it almost daily. But between my yoga club’s Wi-Fi and the street beyond the parking lot is a dead zone where I lose connectivity. Standing with my mat and gear, I check messages and deal with them in the club before I go outside. Once in the car and entering the city streets, cellular returns to my phone, but I can’t just walk to my car as I check messages because of the dead zone.

I spend time at a large health care clinic which sometimes means walking between offices and buildings. The Wi-Fi remembers and connects me but moving out of the Wi-Fi zone in one office to the Wi-Fi zone in another office means passing through dead zones. I revert to what I always do – turn off Wi-Fi and restart on cellular.

I’m glad to hear there’s a solution for Wi-Fi dead zones. I always thought my cellular carrier was to blame, but now I know that it’s an issue with the two mobile phone radios themselves. Mobolize has the only on-device solution that effectively manages the radios and eliminates dead zones.

And with Wi-Fi dead zones fixed, I’m sure Aja will appreciate that I give her more pets and less complaints.

Think Wi-Fi dead zones don’t exist? Think again. Dead zones are all around us and we experience frustrations in dealing with them daily. Stay tuned for more dead zone tales.