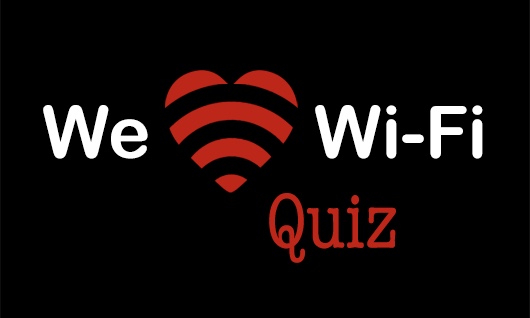 World Wi-Fi Day is this Sunday, June 20. To be prepared for it, we’ve developed our annual World Wi-Fi Day Quiz where you learn some fun facts about Wi-Fi. Facts that will make you the hit of any group event you attend (masked, socially distanced or whatever the local rules are to be safe from Covid) including a Father’s Day celebration. If you’re a dad, learning these facts can be used to impress the kids, or at least be turned into Dad jokes.

A bit of history about World Wi-Fi Day first. It was started by the Wireless Broadband Alliance as an initiative to help accelerate affordable wireless connectivity around the world with the HOPE for Connectivity charter. This charter directs the attention of cities, governments, fixed and mobile operators, technology vendors, anyone involved in the internet and the general public to recognize, celebrate and support the role of Wi-Fi in socioeconomic development. The goal is to advance and accelerate affordable connectivity solutions for the unconnected around the world, or to help eliminate the digital divide.

This past year we all got very reliant on Wi-Fi in our homes as that’s where most of us worked, and students used Wi-Fi to attend video classes. But many people in the world don’t have access to Wi-Fi and that’s where the digital divide comes in. Awareness is the first step. Solutions are the needed second. Hopefully our World Wi-Fi Day Quiz will help awareness and inspire solutions.

Let’s get started on the quiz.

1. Where was the technical birthplace of Wi-Fi?

a. Silicon Valley, CA, where everything tech is invented
b. Netherlands
c. France, where lots of tech is invented – like moving pictures, Minitel and camera       phones
d. The Pentagon, Washington, DC

2. When was Wi-Fi first available to consumers?

3. Where is the fastest Wi-Fi in the US?

5. Which chain has the fastest free Wi-Fi?

6. Who invented the first mobile phone?

8. Who was inspired by Stephen Hawking to develop a technique for reducing multipath interference of transmitted radio signals?

a. John O’Sullivan, leading a team of Australian engineers, who was inspired by Hawking’s theory of evaporating black holes and their subsequent radio waves
b. John Smith who spent a brief amount of time in Hawaii and developed the theory for reducing multipath interference on a morning run on the beach
c. Roger Penrose who collaborated with Hawking on general relativity theory
d. Alexei Starobinsky who met Hawking in Moscow and had many discussions about the uncertainty principle

Here are the answers to the quiz. Now you can show off your Wi-Fi smarts at any upcoming Father’s Day celebration and make Dad jokes about Wi-Fi. (Example: Q: Who’s the Father of Wi-Fi? A: Me – your dad, because I pay the bills and wireless costs less.)